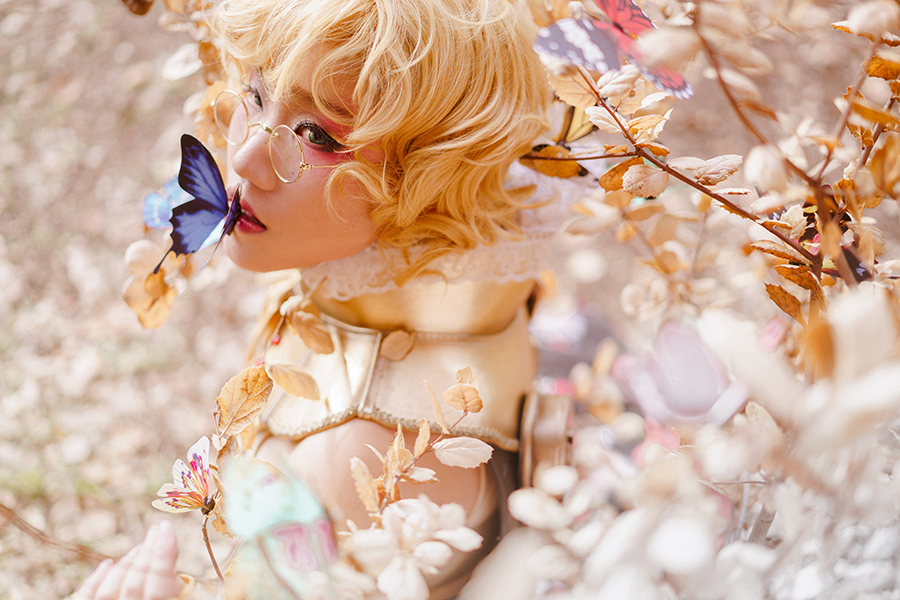 Bunny Tuan’s cosplay photography is an excellent example of what we may call cinematic photo art.

It’s like seeing the very spirit of the places or characters involved, and it all comes with a significant dose of refinement, grace and ingenuity. No matter the subject involved, every picture she takes wins your attention and gently transports you into a dreamy world. This interview is dedicated both to cosplayers seeking different perspectives for their photoshoots, and to photographers interested in visual story-telling.

How did you start your cosplay photographer career? Can you tell us a bit about your first cosplay photoshoot?

I started doing cosplay photography ten years ago. I was an amateur who liked photography, as most people at that time. I didn’t even know how to use the camera, or what ISO means. We just needed some photos for our cosplay group. Five years ago, I bought my first camera and also started my studies in the U.S. I met new friends who were also cosplayers, we traveled and took many cosplay photos in different locations. I found out that photography could help me convey more feelings than cosplay itself. Maybe this is why I took a chance into cosplay photography.

It’s hard to remember my first cosplay photoshoot. Most of them were informal. Even if I didn’t have a good camera at that time, my friends liked my compositions, although they looked so simple. I remember the first location, shooting with a cosplayer I didn’t know. The cosplayer contacted me online. We exchanged emails. I didn’t even know how the cosplayer I was to photoshoot looked like. I was so nervous! I couldn’t figure out whether the cosplayer would be satisfied with the photo session, or if she would like to talk to me during the shooting. Hundreds of questions went through my mind. I tried my best to calm down and focus on the shooting.

Could you explain the concept behind your photoshoots? What is the main message you want to convey through your photos?

Some say that a good photo is definitely related to having very good and expensive gear. What’s your opinion about that? Do you think that a cosplay photographer could pull out some really good results even without thousands of dollars equipment?

Expensive gear can help an amateur take a photo that looks good. They use the depth of field to show a pretty image, or a wide angle to catch the momentum in a photo. That’s the most you can have with thousands of dollars equipment. The only thing you can’t buy is the idea. Ideas come from our life experience. Interesting things always happen around you. Good equipment can help you start your photography at a high level, but it cannot help you upgrade.

Talking about gear, what’s your favorite one? What equipment do you usually use in your photoshoots?

A photoshoot is definitely a very complex process. Can you detail a bit about how you organize your photoshoots? How much of the entire process is decided by you and how much by the cosplayer?

I was asked to take a photoshoot with a series I didn’t know. I need at least to watch the animation to know about the story and characters. I have to get the feeling of the story and characters in my own understanding, and then transfer them into the photo I want to have, before the shooting. I don’t tell cosplayers what I have in mind unless they need to prepare some props for the ideas.

Sometimes, cosplayers tell me the story they want to shoot, and then I need to arrange the storyboard in mind, in order to re-tell that story. I think that I control the photoshoot for about 70%－80%, while 20% is the cosplayers (sometimes) telling me what they want.

Overall, to me a photoshoot means 40-45% preparing, 30% the photo-session, and 25-30% the post-processing. I use Lightroom for color editing, and Photoshop for detail editing. Color helps conveying emotions better. I use a few presets in LR. I create a new color preset for each new set of photos. In every set of photos, I change each photo a little bit. I don’t like the all-in-one preset for each set.

I edit the details in Photoshop. Fabric folds, liquid, freckles, small props missing, props background overlay and so on.

Sometimes, I love creating interesting logos for each photo.

Please name one very common mistake you noticed at many cosplayers during a photoshoot session. What is your advice in order to avoid it?

Before the photoshoot, prepare stories, although they are not complete, and many references for the kind of feeling you want to convey with your photos. If you are not an experienced cosplayer, try practicing emotions and poses in front of the mirror. If you face the camera without the mirror practicing, you might feel nervous when you want to express your character, even if you know what you want to pose.

Some photographers don’t prepare that much before the shooting, and it’s possible that they don’t know the idea and the subject. Communicate with your photographers more – it’s really important. Push them to understand what you want (it’s not a bad thing). If you don’t get a nice photo in the end, please think it over and see if you told the photographer what you wanted, even the storyboard. Don’t forget to prepare as much as you can before the photo session.

Could you describe one of the most memorable photoshoots you’ve ever made?

I wanted to make a memorable photoshoot during a travel, but I never had the chance.

Among the photo-shoots I worked on, I think the most memorable is the night shooting for MAGI – Morgiana the dancing version (image: http://goo.gl/0uXJ6L). The location was Golden Gate Park, San Francisco. There was no light around us in the area. We did the photoshoot with two flashes, two bullet LED light lines set in the background. We had one iPhone flash light to see each other and camera focus. It was in March, the weather was still cold. I didn’t have too much light equipment, but we wanted to create the effect of a festival bonfire. It’s almost impossible to have that effect with only a few lights. I feared I would lose something in the dark, because I really couldn’t see anything with just the iPhone light.

I used time exposure to have more light from a tiny led. Time exposure did also help to create the movement blur of the cosplayer’s dancing. Finally, we got a nice photo in the end. Most restaurants were closed, and we were so hungry.

And, finally, what are your thoughts about yourself as a cosplay photographer?

First, I want to thank all of you who like my works. I was so glad to see your messages and your support for me and my photography. I still need to acquire more experience from life. This is also something I tell everyone. Interesting experiences come from your life. If possible, traveling is a nice choice. I like watching movies and manga, they help me understand more of the screen and storyboard. I also like reading design and graphic books, as many references come from different art books.

All photos in the interview are by Bunny Tuan

Co-founder and former editor-in-chief of CosplayGEN Magazine, editor at CollectiKult, and a translation industry professional.

Plop! The Magazine That Once Laughed at "the Most Gruesome Stories Ever Told in Mystery Comics"

K-Star Road, or K-Pop on a Pedestal